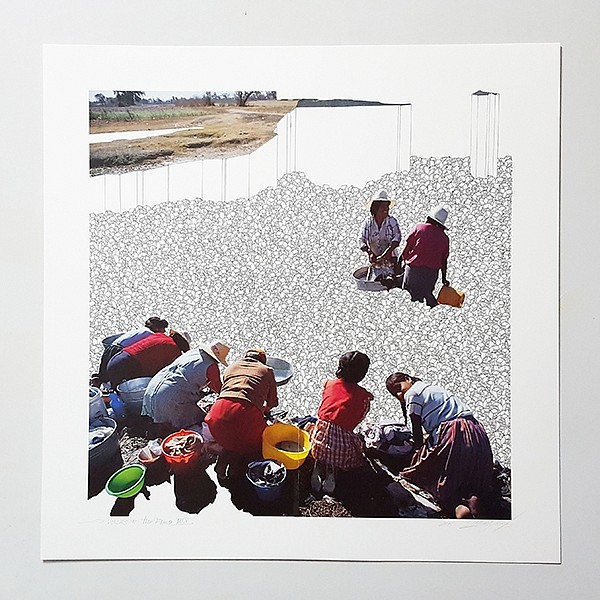 The exhibition features a body of work by three different artists. It deals with the ongoing global climatic crisis, and takes its name from Amitav Gosh’s book “The Great Derangement - climate change and the Unthinkable”.
The Anthropocene, or era of the human, denotes how industrial civilization irreversibly changed the Earth. The planet’s carbon and nitrogen cycles, ocean chemistry and biodiversity - each one the product of slow evolution of millions of years, have been radically and permanently disrupted by human activity.  As an example - a single mine in Canada’s tar sands region moves 30 billion tons of sediment annually, double the quantity moved by all the rivers combined. The weight of the fresh water we have redistributed has slowed the Earth’s rotation. The mass extinction of plant and animal species is unlikely to recover for 10 million years. Plastic, which it’s mass produced began in the middle of the 20th century will remain in existence in some form for another millennia.
Each of the works selected stress a different aspect of this on-going calamity.

Amir Tomashov’s collage works convert the originally sweet-water tributaries of the Ganges, Mekong and Yangtze into endless rivers of building stones.
Tomashov uses the building stones as a metaphor for endless waste, produced by humans, which is carried by these rivers into the Oceans. Moreover, the collage series raises questions regarding social justice as our planet fills up quickly with litter produced by enhanced consumption of first world countries.
Batia Malka’s body of work, “Taxidermy”, examines another aspect of the impact of human technologies that go astray, that of nuclear energy. Malka sculpts ceramic gas masks which form a body. Out of this toxic torso diverge two different animal heads. These hybrids bring to mind the Chernobyl disaster that caused mutations in animals, plants and humans for generations. Malka’s choice of using mammals in danger of extinction is not a coincidence, and implies to the accelerated loss of biodiversity in our world.
Eli Singalovski exhibits large scale photographs of Modernist buildings. The works are a part of an ongoing visual study about this period in architecture by the artist. Singalovski examines the rise and fall of the brutalist modern style and the cultural values that collapsed with it. The photograph “Spitteleck” depicts a former Eastern Berlin building, which was constructed according to a view where the individual is a part of a social and economic network. It included a nursery school, medical clinic, and a dining room.
Soon after the fall of the Berlin Wall and the rise of Capitalism, many of the social functions of this building were gone. The building received a “decorative” addition in form of the huge billboard sign with Coca-Cola’s logo. Coca -Cola manufactures every year over a billion plastic bottles for single use in spite of the – common knowledge by now-that plastic is a resistance substance, which disintegrates in time to smaller and smaller parts but does not perish. In fact, all the Plastic that was ever produced still exists and is responsible for the pollution of the water, land and air.