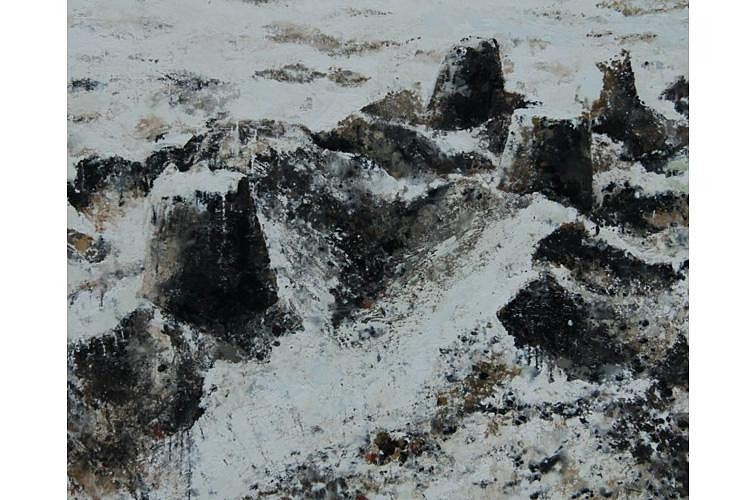 Philippe Cognée was born in 1957 in Nantes, France. He spent his childhood in the African country of Benin, which he attributes the development of his artistic practices. He was able to shape his sensibility and imagination as he was surrounded by vivid sights, smells, sounds, and materials. When Cognée returned to France, this African experience allowed him to be more aware of his own culture, but also sparked nostalgia. He has been exploring the notion of observation, image and memory for nearly twenty years. His waxed canvases, with their characteristic distorted effect, raise questions about the condition of contemporary humankind, and more recently, in regards to architecture and urban landscapes. For "Sea of Sand" Cognée referenced videos taken during his travels in Tel Aviv combined with sandcastles he had built near the Loire River in France. The subjects of dismantled buildings and ephemeral sandcastles combined with the technique of wax painting suggest a theme of fragile construction and deconstruction. Cognée blurs the past with the future, imagination with reality, and vision with memory to create imagery that captivates the viewer in a chilling, yet familiar manner. In recent years his work has been featured in a variety of public institutions, notably the Angers Musée des Beaux Arts (2005), the Claudine and Jean-Marc Salomon Contemporary Art Foundation in Alex, Upper Savoy (2006) and the FRAC (Fonds Régional d'Art Contemporain) in Upper Normandy (2007). His paintings are included in many important public collections, including the Cartier Foundation, Musée National d'Art Moderne Centre Pompidou, Musée Ludwig, Cologne, and Fonds National d'Art Contemporain, Paris.