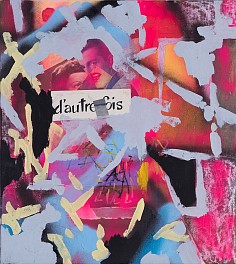 Gilad Kahana (b. 1970, Mexico), is a musician, writer and multidisciplinary artist who lives and works in Tel Aviv. His artworks have been exhibited in solo and group exhibitions at Hezi Cohen Gallery, Tel Aviv, Fresh Paint 8 art fair, Janko Dada Museum, Ein Hod, and Sussie’s Art Bay, Tel Aviv. He is the recipient of the 2015 Israel National Lottery Landau Prize for Arts and Sciences, and of the 2018 Author of the Year ACUM Award.

Kahana has published three books: The Punctuation of Unknowns, (Even Hoshen, 2013); A Crane Points to the Sea, (Hakibbutz Hameuchad, 2009); Plan for a Recovery from Disaster (Keter, 2003).

In 2015 Kahana starred in the leading role in the film A Tale of Love and Darkness, alongside Natalie Portman. He also appeared the film The Man in the Wall and had guest roles in the TV series My Successful Sisters, and Kacha Ze.

Elad Kopler - Born in Ramat Gan, Israel in 1974, Kopler currently lives and works in Tel-Aviv. He received his B.Ed. from Hamidrasha School of Art, Biet Berl in 2004 and graduated with distinction from Bezalel Academy of Art and Design, MFA program, in Jerusalem, in 2006.

Kopler has been the recipient of many awards and recognitions, amongst them are the Award Scholarship, Hamidrasha School of Art Beit Berl College; Award for Excellence, Bezalel Academy of Art Design; America-Israel Cultural Foundation; Young Artist Award, Ministry of Science Culture & Sport; and the Rappaport Prize for Young Painter, Tel Aviv Museum of Art.