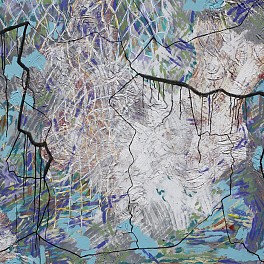 Avivit Ballas Baranes' paintings spread out like a map with landmarks, entry and exit points, expressed in clues, puns, images and materiality. Ballas Baranes works in series whose starting point is conceptual. In the process of translating the idea into painting, it takes on a volume, materiality and words. This tactile, richly processed materiality is the entrance to painting, which, thanks to its physical presence, becomes a body in time–space. This is not a visual illusion, but a physical, palpable presence. Ballas Baranes deals with questions of identity versus alienation, of communicating and liaising between language and culture, in the space of boundaries between things; in the space where there is duality of connection and separation, of disengagement and merging. This boundary space is not just a visual image, but a meeting place with the other, a locus defining the self and hence defining the other, becoming neither self nor other—a locus of transition. After 20 years in Paris, Ballas Baranes now lives in Israel.